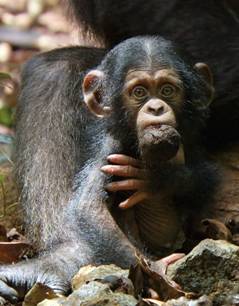 Many, many, moons ago I wrote my undergraduate dissertation on the analogies between tool use in early humans and chimpanzees. It was one of the most fascinating pieces of research I have ever undertaken and I have been left with a burning desire to go to East Africa to see the chimpanzees myself ever since. One day, when I am child free and cash rich I shall visit for myself. If that is, there are any chimpanzees left to visit.

Disney nature have just released Chimpanzee which is a really amazing movie about a tribe of chimpanzees who use tools and follows one particular little fella called Oscar and his life over the course of a few months. It’s  really amazing footage and frankly a very heartwarming story (as you’d expect from Disney).

I sat and watched the movie with all three kids and they were all fascinated, partly I think because there is a lot that you can identify with between humans and chimpanzees. Fifi was very interested in grooming and we had quite a long discussion about meat eating. The footage of tool use is frankly delightful, but also enabled me to talk to them a bit about human culture which nicely slotted in with the Palaeolithic axes we had seen earlier in the British Museum. All in all quite educational for the children and I think a very good way of introducing various ‘tricky to deal with’ concepts such as death and survival of the fittest.

One of the things which is so amazing about this sort of film is the fact that its all totally real. It’s directed by Alistair Fothergill and Mark Linfield who have done some amazing stuff for the BBC and I can honestly say it’s the best natural history film I’ve seen on the big screen. I can’t imagine what they must have had to endure trekking deep into the forest to get the footage at the same time familiarising themselves with the chimpanzees and other potential hazards.

I don’t think I really need to go into much more detail about the film as you can find out loads more on the Disneynature Chimpanzee website Have a little look below at the clip which will give you a good idea about the film. We loved it, I thought it was fab to find something that the kids could watch and learn stuff without realising. Most of all you will love little Oscar, the cutest chimpanzee with what appears to be a bright future.
Disclaimer: We attended a preview screening of the film

Review: The Desolation of Smaug