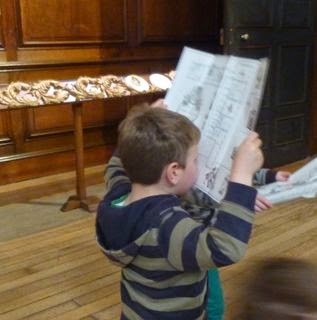 Hampton Court Palace on the River Thames in Middlesex was once owned by Henry VIII and is a magnificent Tudor and Baroque Palace. I know some of this because I was given a brief guide by the seven year old who apparently has been learning about such facts via some programme called Jedward’s Big Adventure which I had banned and which he disobeyed me and watched anyway. How was I to know it was educational?
This year marks 300 years since George 1 ascended the throne and to celebrate this Historic Royal Palaces have some brilliant things up their sleeves. We were really kindly invited along to have a look at their new exhibition at Hampton Court Palace before it opened to the public. A private view! Now I longer work in museums these invites are few and far between, I couldn’t resist a trip along to Hampton Court Palace with the kids to check it out.
The Glorious Georges exhibition showcases some of the brilliant Georgian objects in the historic collection and gives a bit of a potted history of the dynasty and its influence at Hampton Court. Its a sort of added bonus to a day trip there as you get to wander through the building looking at things you’ve never seen before and learn a little about life there during the Georgian period and who would have been in residence.
There has been some thought about how to engage children with the exhibition and my kids were really excited to be given a scratch and sniff sheet to use around the displays. Each room had a particular item with a smell for them to find on the sheet. I think this sort of thing works brilliantly for children but personally I think I would have done it slightly differently. A point in the room where they had to go to sniff and a tick sheet would have worked better as it would have helped guide the children around. Nonetheless, they all got the impression that it wouldn’t have been a fragrant as we would like today.
The other impressive thing in the exhibition for us was the display of costumes made from Tyvec (I imagine) which were placed in each room and supposed to represent characters as court, with a little bit of information about each person.

We learnt some interesting facts from these ghostly mannequins and they were genuinely very interesting. However, although they looked beautiful on closer examination the costumes were of about 3 different types. It would have given a more useful impression, especially for the children if colourful costumes and portraits of individuals were used. In fact to be honest, cardboard cut-outs of portraits  rather than the beautifully made costumes would have been better for explaining the ideas and concepts to my kids.

In terms of exhibitions that I’ve seen over the years, I’m disappointed to have say I didn’t think it was a child friendly space and it really did require a lot of adult input to make it interesting for them. In turn this meant that as adults we didn’t get as much out of it as we could have.
Don’t let this put you off though, Hampton Court Palace is an absolutely fascinating place for children, there is so much to do and explore and they have some amazing activity sheets available. Children can even dress up in costume as they go around. The whole palace itself is exciting and inspirational, my eldest now has a fascination with all things ghostly and this has encouraged him to read everything he can about ghosts which can only be a good thing! 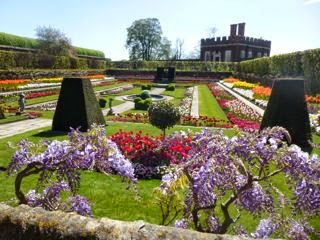 The gardens are absolutely stunning at Hampton Court I don’t think we have ever been anywhere quite as beautiful this time of year and I think I’m going to take the children back in the next few weeks just to draw what they see and talk about flowers.
Our trip to Hampton Court has inspired me to make an effort to revisit all the Historic Royal Palaces, which I’m slightly ashamed to say I haven’t been to since I was a child. This year is a great year to do it because there is a while Glorious Georges Season and absolutely loads of different activities taking place. I quite fancy the Georgian Masked Ball and Sleepover at Kensington Palace (if I can persuade the seven year old he might spot a ghost) and the Georgian Food Day at Kew Palace looks right up my street. There are also Georgian Family Festivals at Kensington Palace, Kew Gardens and Hampton Court in the summer which would be a brilliant thing to do in the school holiday’s. You’ll find all the information via the website here, if you don’t live locally I’d really consider booking a break to go along to one of the events, they should be magnificent.
1
518 Views
Uncategorised

The Day of Poo