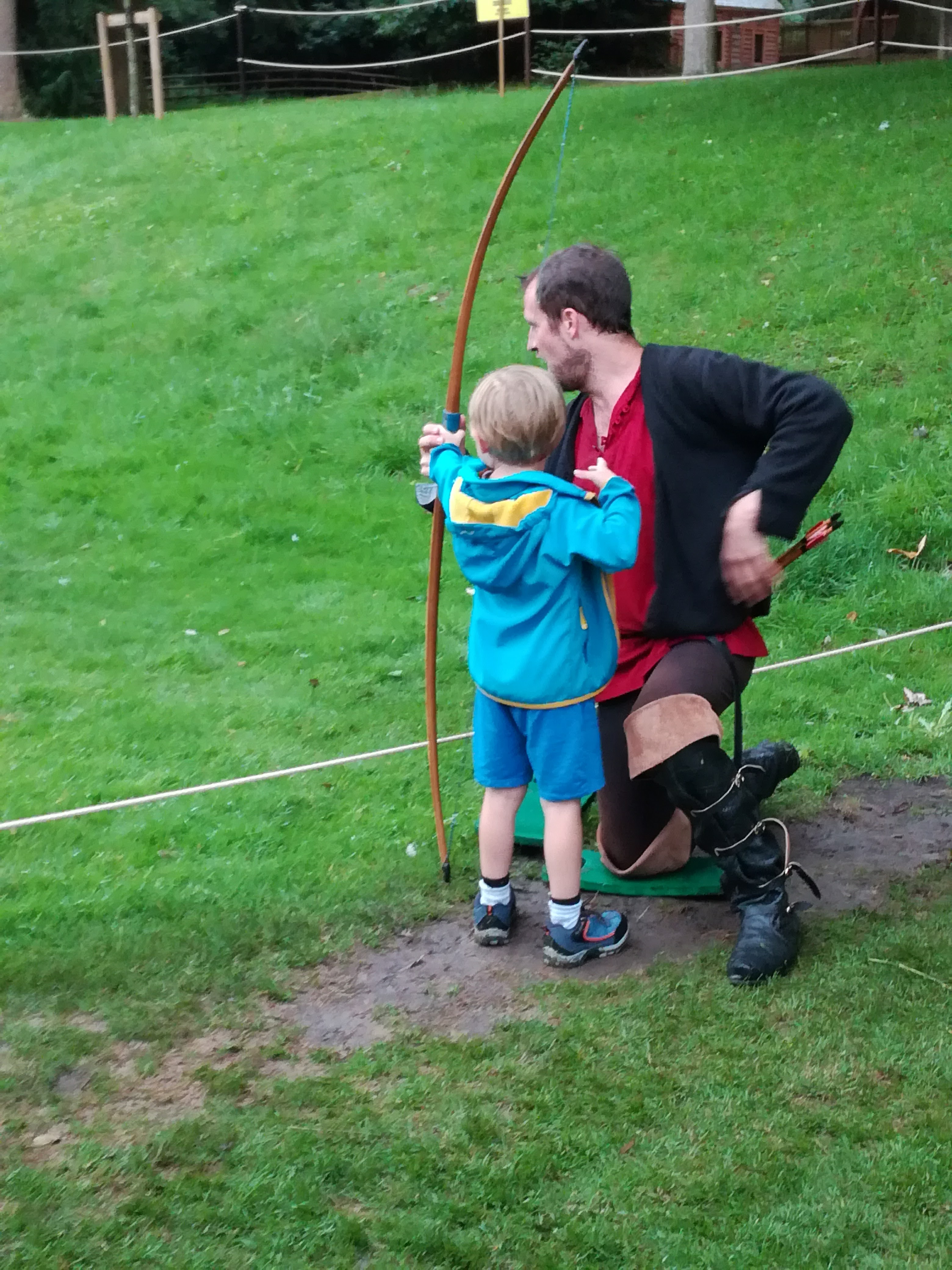 Warwick Castle is one of our favourite days out in the UK and we were thrilled to be invited to stay over in a Lodge in the Knights Village so that we could make the most of a visit and enjoy the new Wars of the Roses experience.

When we arrived at Warwick it was really clear and easy to find the Knights Village which has its own parking area. The reception staff were really helpful and although we couldn’t check in immediately as we had arrived quite early, we were given a special code which enabled us to use a secret gate to access the castle without having to walk to the main entrance. This was brilliant.

After a general stroll around the castle we decided to go and see Wars of the Roses live, partly as there are only 2 shows per day and we wanted to maximise our opportunities to see it. 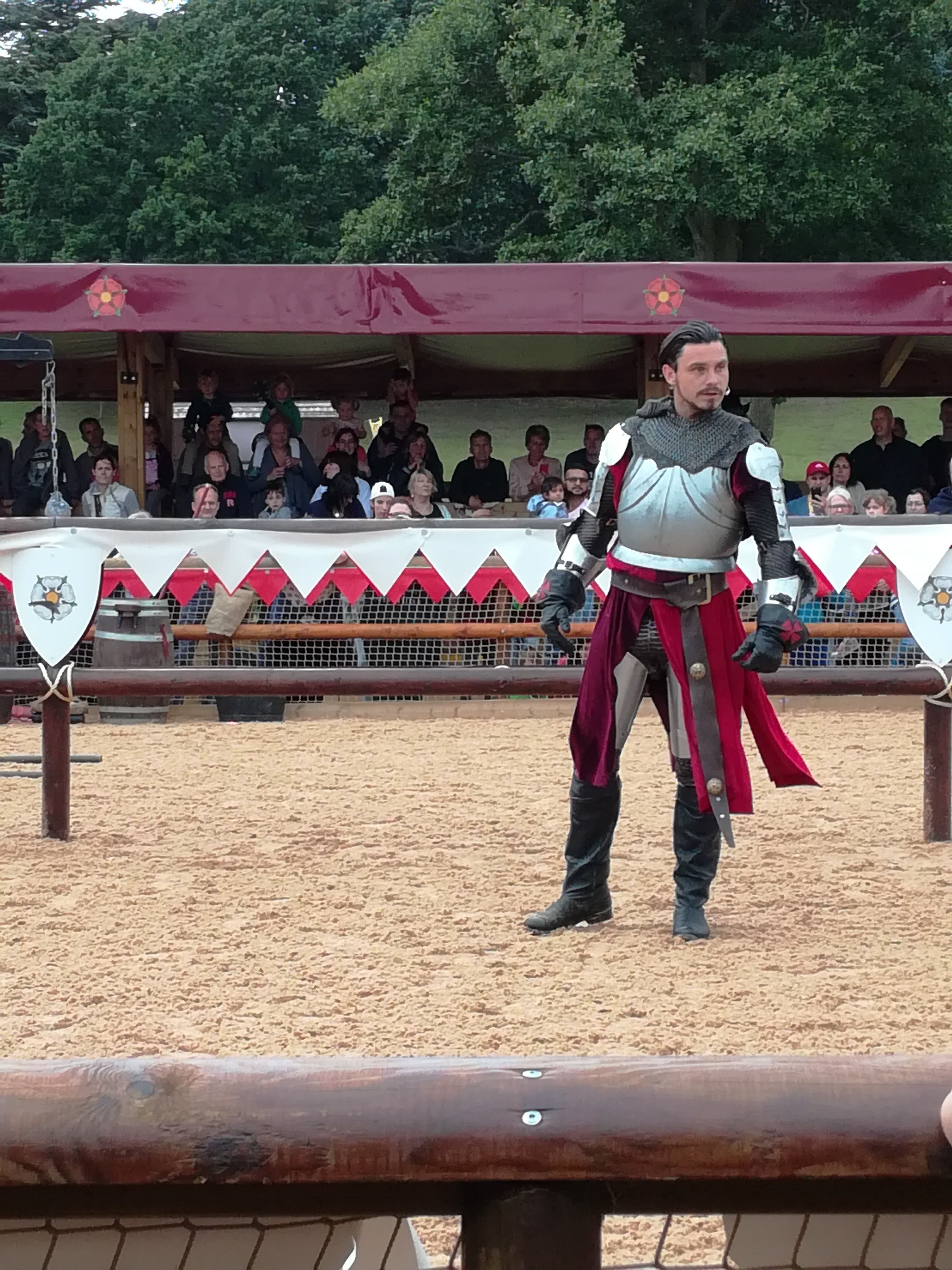 Wars of the Roses Live is set in a specially-constructed riverside arena and is a spectacular show of knightly heroism, all included in  the castle admission at no extra cost. We knew (from having friends who are re-enactors) that the show was staged by a group called The Devils Horsemen who are absolutely without doubt the best at jousting displays and horsemanship of this type in the UK- even appearing in Game of Thrones. So, with that in mind we were all really excited! 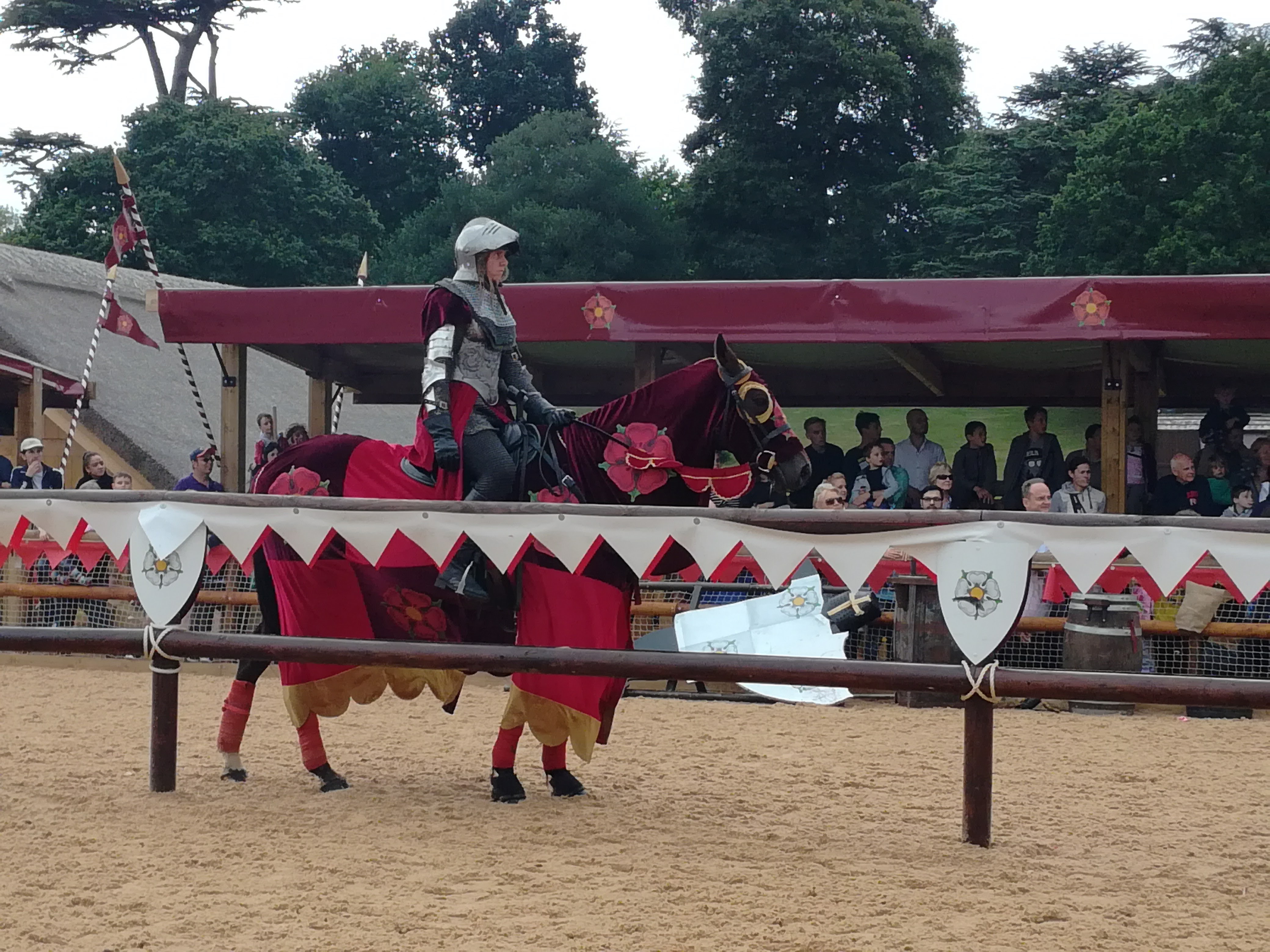 The arena holds a crowd of 2,000 and evokes magnificent medieval jousts recorded in historical sources. It really adds to the whole experience. The show uses the key players in the wider Wars of the Roses story with direct links to Warwick Castle include Richard Neville, Earl of Warwick – known as The Kingmaker, who switched sides from York to  Lancaster and imprisoned Edward VI (whom he had helped to ascend the throne) at the castle; and The Kingmaker’s daughter, Anne Neville – born at Warwick – who became Queen of England upon marriage to Richard III. It really is an amazing spectacle, the horses were incredible and some of the stunt riding simply awe-inspiring. We loved it so much we went back and saw it again. Much discussion followed on how much effort it must be to train both horses and riders to do this sort of thing and whether it would be possible to learn quite quickly!

Top tips for watching the show- make sure you get in the queue nice and early to secure yourself a good spot. We made the mistake of standing on the decking and then lots of people stood in front of us, so stand at the front by the fence  especially if you have small children. Also, make sure you’ve all gone to the toilet before you get to the arena, we saw so many people having to leave to take their children to the toilet as there are none nearby.

Without doubt this trip will be one of the highlights of our summer, not only because we really enjoyed our time in the Castle watching the Wars of the Roses, exploring the castle, watching the bird and the Horrible History show and generally just enjoying our time together. The thing which really made it was the chance to stay over in the Knights Village.

Being an archaeologist with children who really like and appreciate a bit of history you can imagine my utter delight at being faced with a medieval style bed (in fact I was so delighted I tweeted it and put it on my private Facebook page to which many of my archaeological friends remarked jealously). The whole experience was utterly fantastic, both luxurious and historic! The beds were comfortable with crisp bed linen and the wet room was as good as i’ve seen in any really top quality hotel.

Have a look at our video (unfortunately my phone ran out of battery half way) but it gives you a good idea:

The other delightful thing about staying over was the ‘all you can eat buffet’ for dinner and breakfast (in a medieval style banqueting hall) followed by the evening entertainment. The kids had a fantastic time after dinner wandering around by the River Avon and learning circus skills, archery and having the opportunity to have their photograph taken with a falcon. It was lovely to see them doing something active and learning new skills.

Warwick Castle is one of those places which never fails to delight, it is both historic and entertaining and somehow there is always something new to see and enjoy. There was more than enough this time round to keep us occupied for two whole days which I must admit did surprise me. However, I think one of the nicest things about staying over was not feeling that we had to rush and see everything in a day.

Staying over in the Knights Village is clearly really popular, we spotted several families celebrating birthdays both young and old. Having an experience like this is a brilliant alternative to a soft play party or similar, so I could definitely see why people had opted to do this and my children seemed really keen on the idea for us going forwards. You can choose whether you stay in a tent (prices start at £49.75pppn based on a family of four sharing a Warwick Tent, just a few paces from the new show arena.) or a lodge like we did.

Overall a weekend at Warwick Castle is a great experience, we really made the most of our visit and made some memories we wont forget. However, if you cant stay over its well worth a trip to Warwick Castle just to catch the Wars of the Roses Live which will blow your mind if you like a bit of history and some fabulous horsemanship.

Book now at www.warwick-castle.com for the best price guarantee

Disclaimer: We were given free entry to the castle and free accommodation, however this hasn’t influenced my review- our family loved the whole experience! 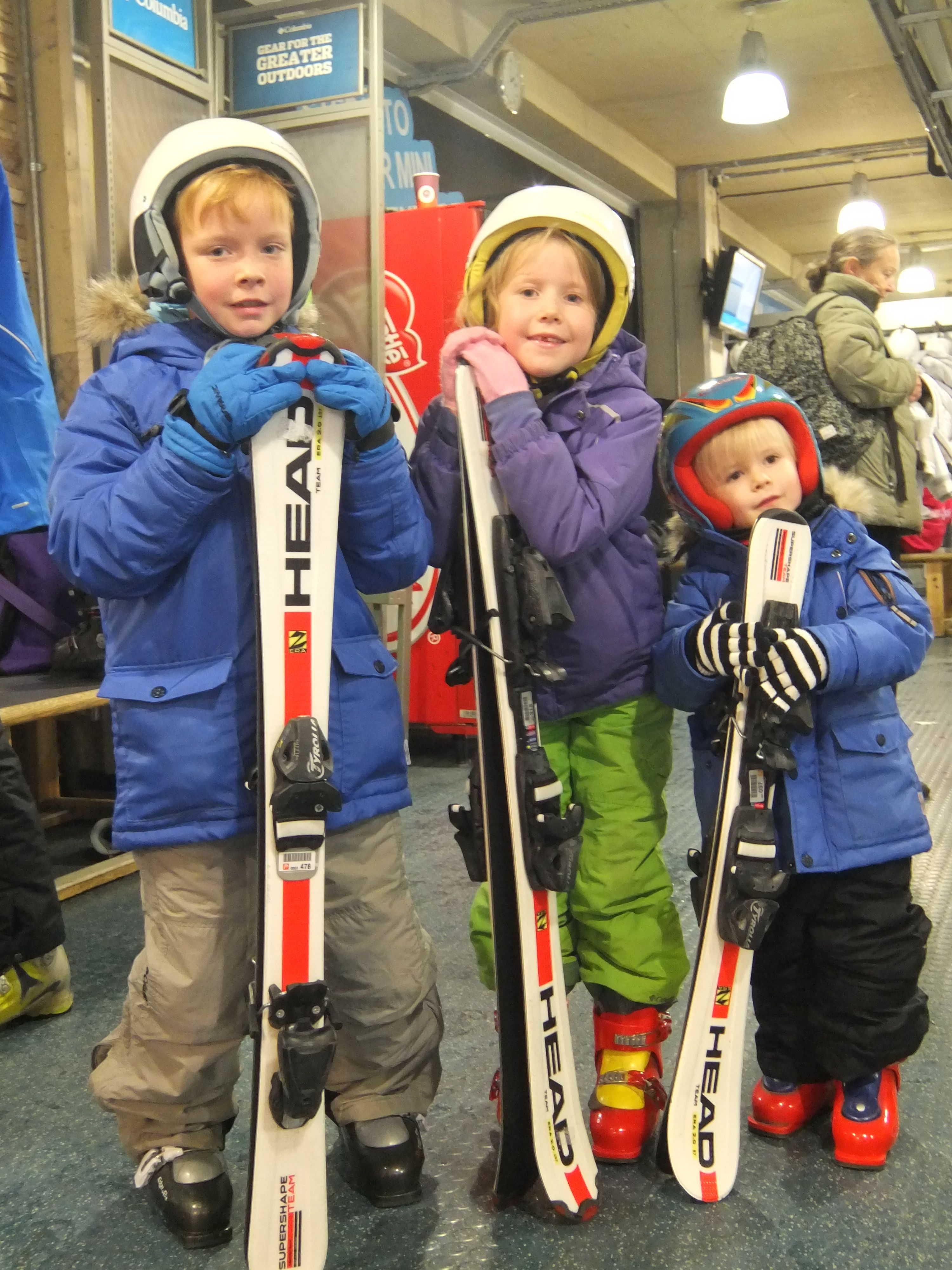 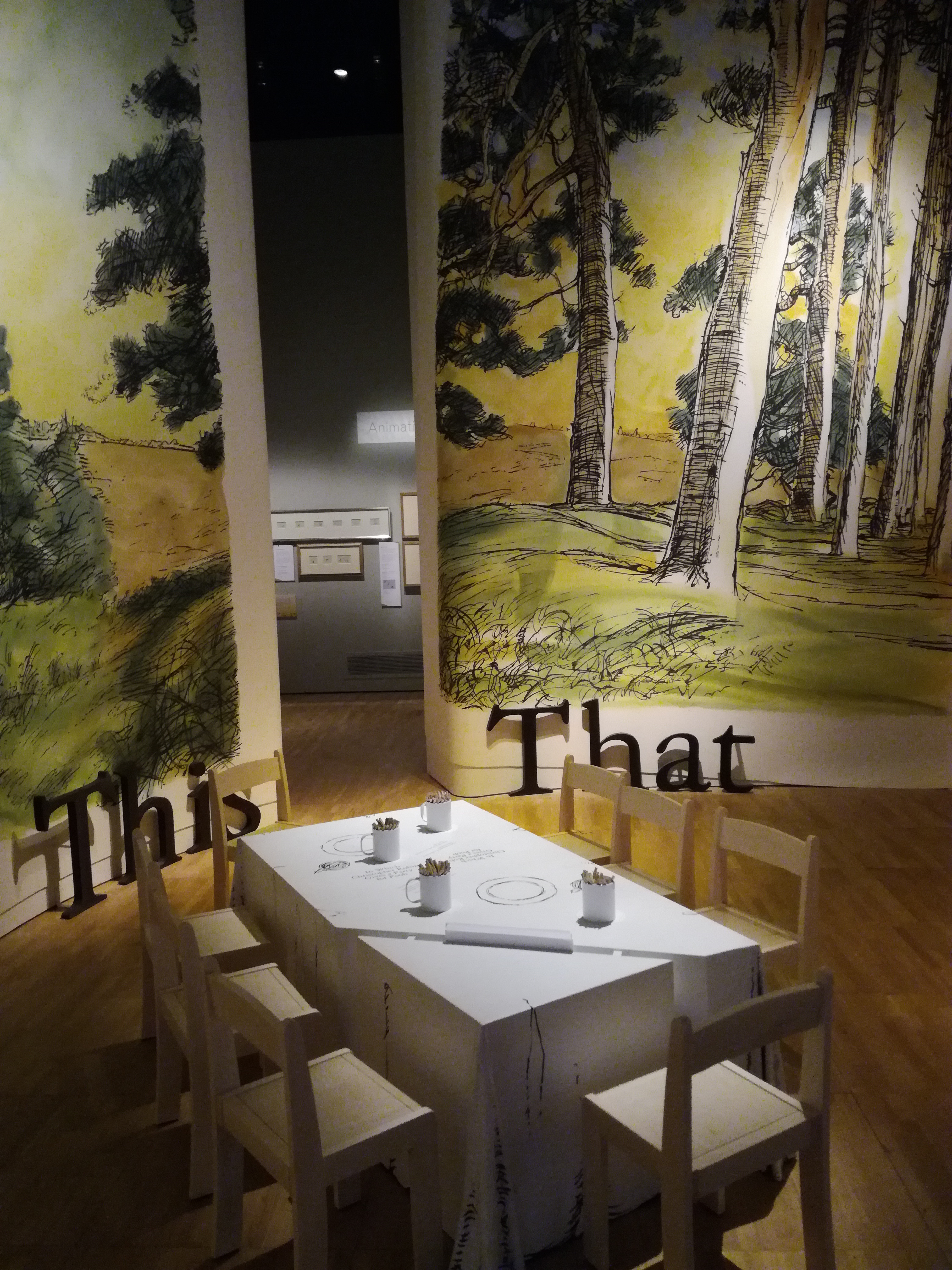 Winnie the Pooh: Exploring a Classic at The Victoria and Albert Museum 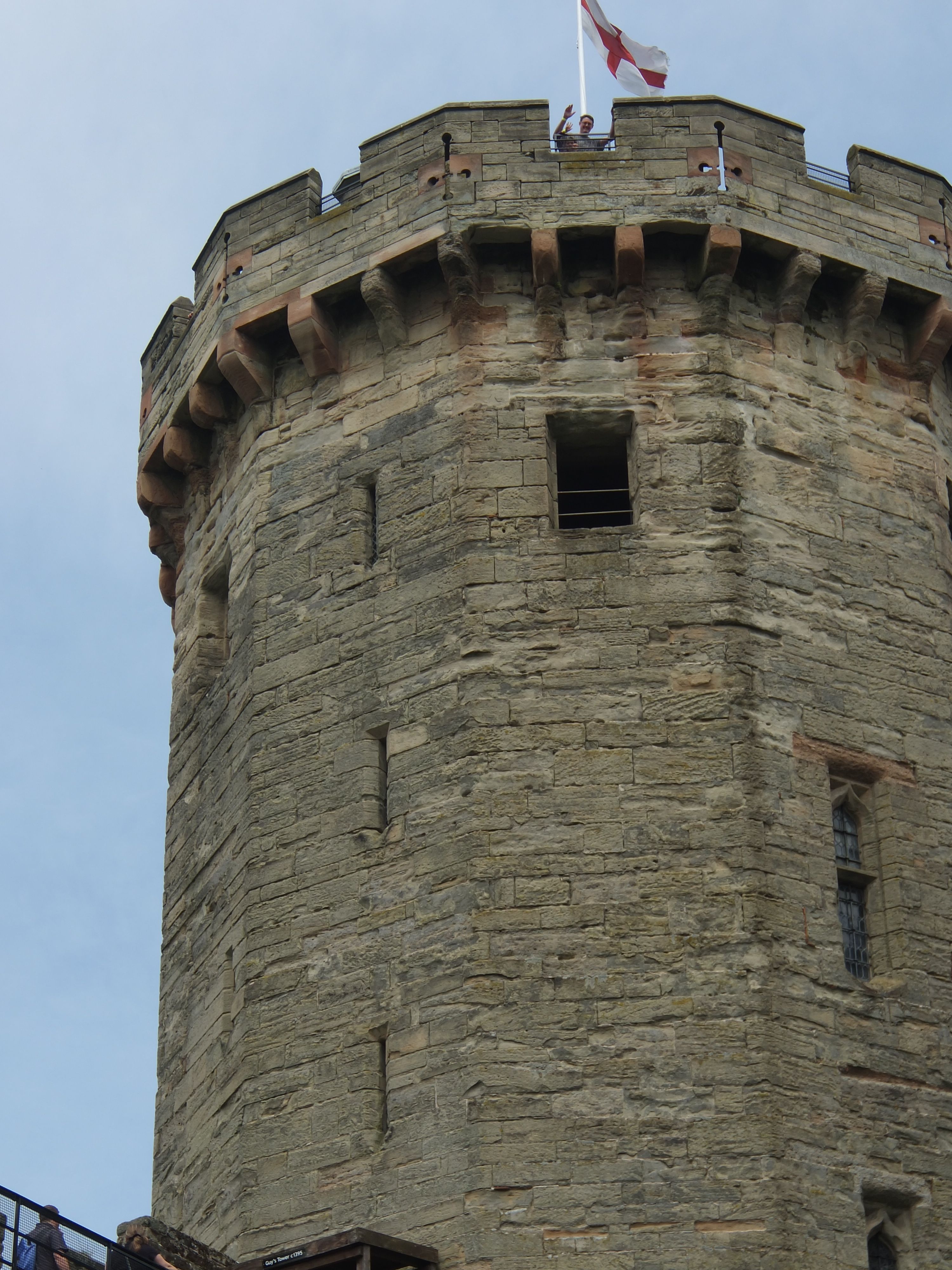 Our Day at Warwick Castle